In July I had the pleasure of speaking at the Grooming Festival in Birmingham, England. The show was produced by Groomers Limited and featured keynote speakers, Jodi Murphy and myself. It was a whirlwind of a weekend with a fantastic group of people who made us feel like rockstars when we were first introduced out on the runway stage. Jodi and I started out with a take-off of “On the Road With Jodi and Danelle” DVD series and then each of us went on to teach seminars on specific topics related to our areas of expertise. 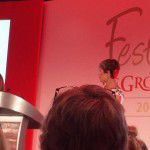 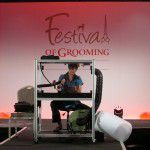 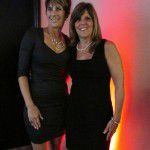 For my live cat groom demo on stage I was provided with a lovely Tortie Persian named May. May was truly the star of the show as she started her performance by being given a Chubbs Bar bath in a hotel room bathroom that was filmed by the fabulous AV crew at the show. May was then carried back to the show stage minutes before I went live, safely wrapped in her towel and tucked into a crate. As I kicked off my seminar explaining some of the fundamentals of cat handling, temperament assessment, and grooming protocol, the AV team played the bathing footage on the big screen for all 200+ attendees to watch. Immediately after the video playback, I started drying May in the CSV that Groomers Limited had shipped over specifically for this live demonstration. May was dried, de-matted, and thoroughly combed out with a “glide” finish and then given a face trim to round off her show groom.
As it turned out, May was headed to her first cat show following the Festival of Grooming. Initially her owners, Nev and Liz Fox, instructed me not to trim May’s face during the live groom demo because it is greatly frowned upon at GCCF shows (Governing Council of the Cat Fancy), the registry in which May was being shown with great hope for some noteworthy titles. However, after the bath session in the hotel room, which was watched by Liz, a friend of Liz’s, her son, David, and the camera guy, it was decided that I could do whatever I felt was needed to enhance May’s natural assets as if I were taking her to a show myself. I love it when cat owners trust me with their kitties to allow me this freedom. Thank you, Liz and Nev, for trusting me to take care of May and groom her just the way I wanted! The risk for them: May could be penalized or disqualified from the upcoming show. “May I?” Yes indeed!
May was a superstar on the stage, acting pretty much just like one would expect of a tortie. She fussed at me a bit and, in typical tortie fashion, made certain aspects of the groom somewhat of a challenge. This makes for a good show, allowing me to demonstrate real cat grooming to the audience. (Real cat grooming is what groomers encounter in their own salons/environments, therefore real grooming is what I like to demonstrate whenever given the opportunity. We actually do a LOT of that at the National Cat Groomers School during our 2-week sessions and workshops! No stuffed animal “grooming” here at the NCGI. Ever.)
After the UK Festival of Grooming, May was shown at a GCCF show in Lincolnshire. She was an untitled cat to begin with, since it was her very first show. Even so, May was placed over a titled cat (Grand Champion) and earned a Best of Breed award! After attending 2 more shows, May is now a Champion and will move on to be shown in more events this fall.
I am now following May’s career. It gives me great pleasure to know I had a hand in getting her started on this new adventure for her and her family. I truly enjoyed meeting the Fox family and was particularly impressed with Liz and Nev’s son, David, who was a tremendous help to me at the show and quite the little English gentleman. I have heard from Liz that David is continuing to learn to care for May by assisting with some of the grooming and helping to keep her eyes clean (a daily job on a Persian). He also guards her benching cage with great diligence during show weekends as sometimes spectators aren’t very considerate about treating these show cats with gentleness and respect. Well done, David. I hope to meet you again one day.
Thank you Nev and Liz for allowing me to groom May any way I wanted and for sharing these photos with me. I wish you much success in the future!
CH Heathrose May Barclay
Tortie Persian
Breeder: Ian Morris
Owners: Nev and Liz Fox 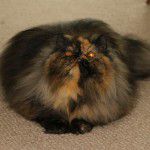 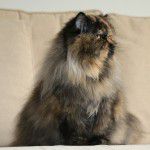 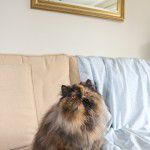 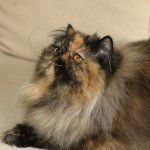 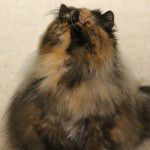 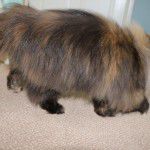 May, lounging around at home in between shows. Enjoying the good life.