Things I Learned From a Pomeranian 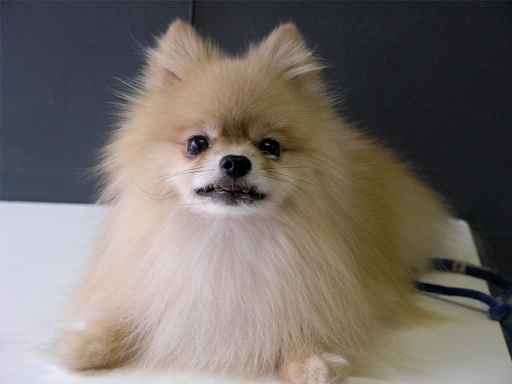 I’ve been working on several new lectures this year in preparation for upcoming shows both in the US and abroad.  As I ponder on the topics I want to cover I think of Puff Puff.  Who is Puff Puff, you ask?  Well, he was a toy Pomeranian that I had the misfortune of grooming once upon a time ago.  I’m pretty sure Puff got the short end of the stick, though, as my dog grooming knowledge and skills could about fill up an entire thimble.  Needless to say, my adventure with Puff Puff was my first and last foray into the world of regular dog grooming, and it taught me something that I think every groomer should know.

I borrowed Puff Puff for a particular purpose.  We were doing a photo and video shoot of the Catty Shack Vac ™ in use and wanted to show that a dog, as well as a cat, could be dried in it.

So I asked my sister-in-law if I could borrow her beloved Puff Puff for the event. She was happy to get a free groom out of the deal because Puff was badly matted.  He was in full coat at the time and in dire need of a groom.

I think Puff weighed all of 4 lbs with his collar on and soaking wet.  Keep in mind that many of the cats I groom tend to be four, five, and even ten times that weight.  I had no idea what to do with this tiny ball of matted fur that danced around on my grooming table as if his feet were on fire.  He wouldn’t hold still!  As I checked out Puff’s coat and realized the state it is was in, I began to panic.  Can I bathe a Pom in full coat with mats and get them out in the CS Vac like I do with every cat that is matted?

Seems like I’d heard along the way from my dog groomer friends that this is not the way to go.

What if I have to shave Puff?  What blade do I use and how the heck am I going to shave that itty bitty little belly while the dog is doing the Electric Slide all over the table?

Before I could ask myself more questions that I had no answers for, I picked up little Puff Puff and plopped him into my Forever Stainless Mini Tub.  Good thing I had a toy Pom to work with, I told myself, considering all of my equipment is cat-sized.

The bath went well.  I degreased the heck out of Puff, just as I do with every cat.  I didn’t know if Poms got greasy, but I figured it couldn’t hurt.  After the bath, Puff got wrapped in a towel.  I tried the “kitty burrito” but that didn’t work out too well, mainly because Puff Puff wasn’t into lying down and folding his legs up under him like a cat does.

I tried to smoosh him down a few times, but to no avail.  I proceeded to clean Puff’s ears and eyes, following the same process I use for cats.  Puff was more interested in jumping up and hugging me it seemed.  Not what I was used to from my feline clients, to be sure.

Off to the CS Vac we went.  “Here goes nothing,” I told myself.  If I couldn’t de-mat Puff Puff a la cat style, well, then it might be we head on down the road and beg Phyllis the dog groomer to PLEASE SHAVE THIS MATTED DOG FOR ME!  And don’t tell anyone that I brought him in. Please!

As luck would have it, Puff’s mats came out without too much trouble.  He almost reminded me of a Himalayan.  Except for the constant prancing about and spastic behavior.  And the fact that I couldn’t scruff him and flip him upside down to dry and de-mat his underneath.  That was a challenge, I can tell you!

Rest assured that portion of the videotaping got edited right out!  The last thing I need is for that scene to end up on YouTube.

At last Puff Puff was clean, dry, fluffy, free of mats and looking an awful lot like a long hair cat of some sort.  I was so pleased with my work.  Maybe I could be a dog groomer, I thought.  Naw….too much work!

Some time later the photos were used in some advertising.  Mission accomplished, and I was feeling so proud of myself.  At least until some of my dog grooming friends snorted and chuckled when they saw the pictures.  “What was so funny,” I asked. “You left toe tufts on Puff Puff,” they teased.  Didn’t I know that his little feet were to be all trimmed up, according to breed standard?  Well what did I know of Pomeranian breed standards?  I just figured that what I knew about cat grooming could apply just as easily to this little ball of canine fur.  I was wrong.

Puff Puff (may he rest in peace) taught me a valuable lesson that day.  I shouldn’t be grooming dogs (not that I want to) because I am not an expert in the art of dog grooming.

Even though I thought that little Pomeranian looked so great when I was done with him, to the trained eyes of my colleagues, he looked simply awful.  I know nothing of breed standards and coat types not to mention how to properly handle each one. Should I ever decide to add dog grooming to my list of skills, I have a LOT to learn before I am properly prepared to do the job correctly.  Hmm. I wonder how often dog groomers are applying what they know about dogs to all of the cats they groom because they have no knowledge about standards for cat breeds?